Olga Sagan, owner of a piroshky bakery in Seattle, recognized the growing popularity of food trucks in recent years and also saw its unique value in building her company's brand. 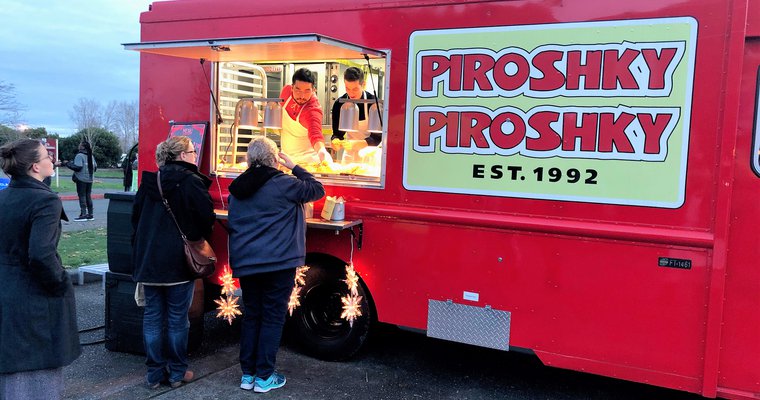 The Piroshky Piroshky food truck has capitalized on the bakery's reputation in Seattle.

Editor's Note: This is part one of a two-part series on how a Seattle bakery operator capitalized on its reputation to establish a successful food truck.

For Olga Sagan, a food truck was a logical way to expand her chain of bakeries specializing in piroshkies — made-from-scratch, hand-held pies with savory and sweet fillings.

In the 20 years she worked at the original Piroshky Piroshky bakery in Seattle's Pike Place Market, she has learned nearly everything she needs to know about the Russian street food, including how to market it.

An astute observer of Seattle's dynamic food scene, Sagan — who held every position at the company after emigrating from Russia, becoming a partner in 2006 and sole owner in 2018 — recognized consumers are becoming more adventurous in their eating habits, a trend that bodes well for ethnic cuisine.

"People are becoming interested in different kinds of food like never before," Sagan told Food Truck Operator. "This is a time for businesses that weren't mainstream before to thrive and find their place in the United States. There's room for growth in Seattle and there is room for growth for Russian cuisine across the United States. We are an American brand with a very heavy Russian influence."

"It's a very unique food," Sagan said of piroshkies, which are similar to a Polish cousin, the pierogi. "Pierogis are plated food, piroshkies are hand held food," she said. "It's like a baked sandwich," featuring fillings such as smoked salmon or chicken curry.

The company has been introducing Seattle residents to piroshkies since its founding in 1992, and its growth in recent years to five locations was driven by the community's appreciation for the food. Sagan estimated 99% of the people in Seattle are familiar with the brand.

"We don't do anything but piroshkies," she said. Popular items, which sell for $5-$7, include smoked salmon piroshky and the sausage piroshky that uses jalapeno cheese sausage. The company recently introduced a vegan line.

Like many brick-and-mortar operators, Sagan recognized the growing popularity of food trucks in recent years, and also saw its unique value in building her company's brand.

"People are very happy to see food trucks," she said.

"We realized that we have a strong brand and our food is very mobile, it's grab and go, it's freshly baked," she said.

With aspirations to expand to more brick-and-mortar locations, Sagan believed a food truck would allow her to know what parts of the Seattle area are most familiar with the brand, which would enable her to decide what geographic markets to expand to.

"The idea is to use the truck to explore where our brand is known," she said. "Building brick-and-mortar to check the market is very hard. Taking a food truck somewhere is much easier."

Sagan became especially interested in having a food truck after observing Seattle's improving flexibility with its food truck restrictions in recent years.

"Five or six years ago it was nearly impossible to do it because of the regulations," she said. "I think it started to change with peoples' need for a variety of food and mobile food."

The bakery already had a commissary for the truck, which is still required.

Sagan bought a 2002 Ford Workhorse truck for $20,000 in Portland, a one-time courier delivery truck, from a truck builder, and paid a Seattle food truck builder $25,000 to retrofit it. The truck has a Blodgett gas oven, a refrigeration unit and a bakery rack, which Sagan selected. The truck came in bright red, which is consistent with the brand.

The truck carries a limited menu of six items along with bottled soda and water. The company uses two handheld Clover POS devices on the truck, the same system it uses in its restaurants.

Sagan also opened a freestanding commissary in the company's headquarter building to warehouse the food for the truck.

Part two of this two-part series will explore how Sagan capitalized on the bakery's reputation to establish a successful food truck.