Prior to the COVID-19 pandemic, digital signage technology upgrades at drive-thrus were a mixed bag across the fast casual and quick-service restaurant industries. 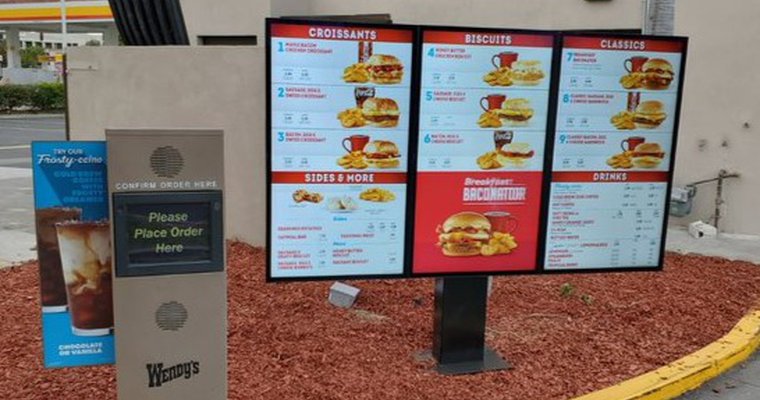 Prior to the COVID-19 pandemic, digital signage technology upgrades at drive-thrus were a mixed bag across the fast casual and quick-service restaurant industries. While some chains were embracing the latest offerings by digital signage companies, others were just dabbling into the technology.

March 2020 changed things for those slower-to-adopt chains, however. 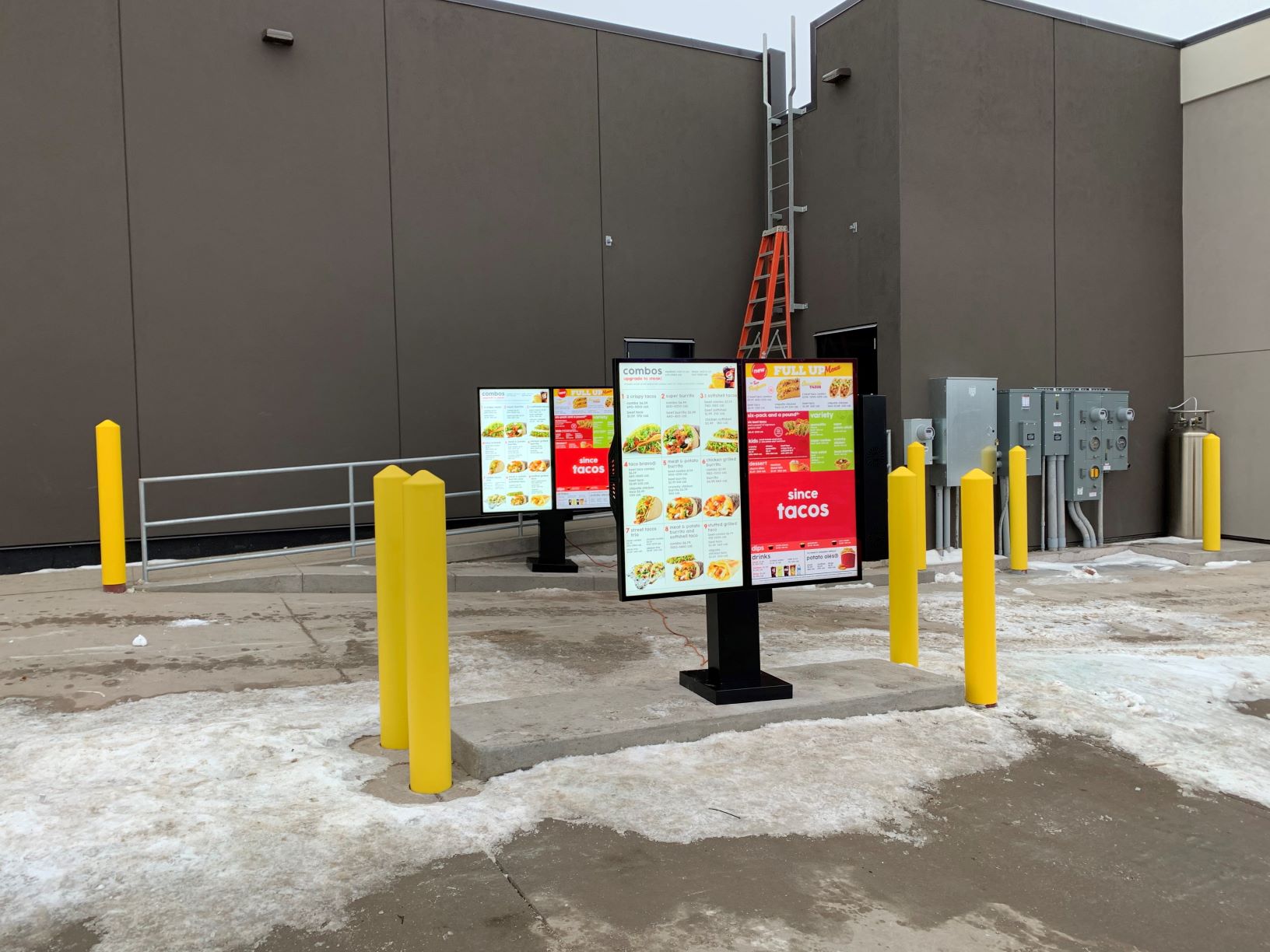 With the pandemic shutting down in-person dining across the U.S., restaurants had to think of new ways to engage customers and began leaning on drive-thru orders and a relatively new phenomenon called "curbside pickup." For customers, it was a safe, efficient and easy way to buy a meal and support businesses.

For the businesses, curbside was a lifeline that led restaurant executives to rethink their digital signage plans, especially at drive-thrus.

"The industry had to weigh up how the 'new normal' would impact the application of digital displays and what new innovations could be applied to assist clients with the challenges they faced," Chris Day, managing director of Moving Tactics, a digital signage solutions company based in South Africa, said in a press release.

Working with retailers and QSRs through the pandemic, Day has found that technologies such as digital drive-thru menu boards have increased in popularity.

"They have added enormous value to the way in which these businesses now function," he said.

"During the pandemic, McDonald's discovered that digital signage was critical to making quick changes on the fly and in so doing, remain flexible and agile as a business. They have decided to employ a range of digital menu boards, self-service terminals, and drive-thru menu boards as solutions," said Kevin Bierman, head of digital signage at Moving Tactics.

Like Moving Tactics, USSI Global has helped deliver digital signage to QSRs for more than 25 years. Samsung designs and builds the signage, and USSI Global works with restaurants to implement it outside their stores.

"There are 235,000 drive-thrus in the US, there's only a fraction now that are digital," Chris Northrup, VP of digital media and network strategies with USSI Global, said in an interview with Digital Signage Today. "To that stat, there's a whole lot of digitalization that's going to occur here in the near future."

Northrup said investment in drive-thru digital signage was increasing before the pandemic. Then it nosedived as revenue losses mounted from decreased sales. In recent months, however, Northrup has seen spending on digital signage increase and expects the trend to continue.

"One of the reasons I haven't done a lot of fast casual (work) is because they haven't been doing a lot of digital, but I think that's going to change, especially with curbside pickup," Northrup said. "Just prior to the pandemic, we were heavily involved with the McDonald's rollout. We did about 1,200 sites. We started working with a couple of large brands, they were doing pilot (programs), and it seemed as though they were on the cusp of some major installation work. Then COVID just stopped it. Put the brakes on all of it. Then it was a matter of retooling, figuring out what they needed to do."

Northrup said he watched some brands switch to completely drive-thru sales. Several employees would lineup outside to take orders to keep the process moving swiftly.

"To an extent that is still happening at some stores, but its starting to get back to 'Let's get digital done,'" Northrup said.

Denver-based Chipotle, which has nearly 3,000 locations, has found success with its drive-thru,Chipotlane, launched in 2018, said Tabassum Zalotrawala, chief development officer.

"In 2021, we anticipate opening 200 new restaurants, with 70% of new locations including a Chipotlane," she said in an interview with Digital Signage Today. "Because the Chipotlanes are different from the traditional drive-thrus in that there are no menu boards and minimal directional signage is required, only when the site layout is not intuitive enough for guests to follow 'enter' or 'exit' patterns."

Could AI be the future?
Northrup believes voice-recognition ordering through AI will be an emerging trend. The pandemic forced a lot of restaurants to lay off employees and companies realized they could do more with less workers.

"That's sort of always been a conversation with a QSR, which makes them a QSR, but now we've been on several calls with companies that have voice AI," Northrup said. "You come in, you make an order at the order point and you're not talking to a person, you're talking to an AI that basically knows what to ask, how to ask it all the way through."

Northrup said AI can help increase order accuracy numbers, boosting sales. Restaurants are starting to use AI with varying degrees of success, according to Northrup. And it's not just the big boys who are thinking about AI.

"I was talking to a guy who owns a bagel shop in Philly and he's trying to get an AI for voice (ordering)," Northrup said.

Companies are also examining how to gauge drive-thru sales. Northrup said investments have been made into technology to monitor customers the moment they drive into the parking lot.

"Say somebody gets up to the pre-sale board and they drive off, so you can figure out how many drive offs you've had in a day. Then you can start to figure out why they are driving off," he said. "Is it not enticing enough? Is the line too long? Should they split if off? Should you have more people out there getting orders at certain times of the day? It's really about getting more data so you can make more decisions based on what you see within the data."

Curbside pickup here to stay
As the country continues to open up and businesses rebound, more QSRs and fast casuals are investing into digital signage for curbside pickup as well.

"Now you go into some of these places, you don't see a lot of digital technology yet but maybe you pull in, there's a sign that isn't handwritten that says text your order number or go to your app and let us know you're here and we'll have your order right up," Northrup said. 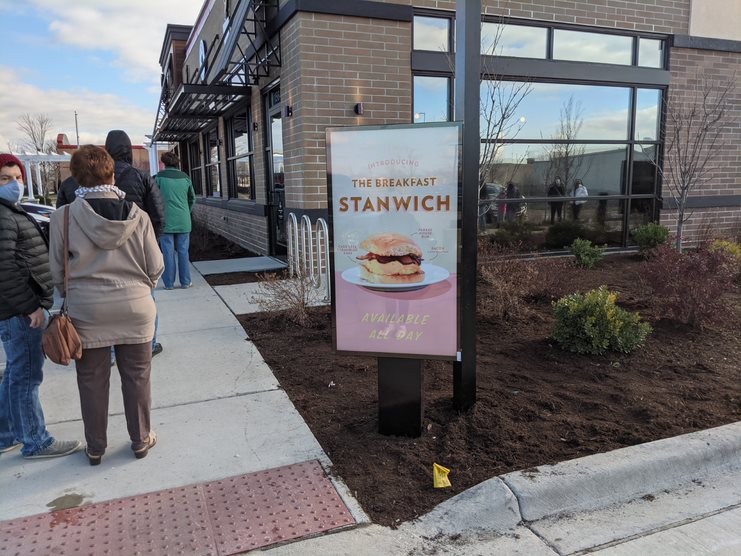 Casual-dining chain Golden Corral was hit hard by the pandemic but adjusted by finding ways to bring in customers through curbside pickup. Northrup said the chain uses a 55-inch screen outside the store inviting customers to use curbside pickup.

Chipotle introduced a series of digital innovations after COVID hit in March 2020. Zalotrawala said the chain uses a digital kitchen feature, which relies on employee teams and ingredient stations to spend more time on digital orders.

"A new tracker feature in our app provides real-time meal delivery updates, and the app and our website now gives customers the ability to leave special instructions for delivery drivers to limit direct contact," Zalotrawala said.

For Chipotle, digital sales generated $2.8 billion and accounted for 46.2% of sales in 2020, according to Zalotrawala. Half of those sales were from delivery. That promoted Chipotle to take a bold step.

"Most recently, we launched the Hand-Crafted Quesadilla, our first customizable menu item in 17 years, across the United States and Canada," Zalotrawala said. "Our post-pandemic marketing initiatives have largely focused on culturally relevant campaigns that drive awareness of the Chipotle app and our delivery capabilities."

USSI Global CEO David Christiano thinks curbside pickup is here to stay. Not only does it help businesses with another sales option, but it's also quick, reliable and safe for consumers. Christiano also believes kiosk ordering will increase in the coming months. For QSRs and fast casuals, the digital options seem to grow by the day.